About the Giant Lanterns

The Edinburgh zoo has had a giant lantern festival for the past three years. In 2017, the Giant Lanterns of China tradition was born with 34 different lanterns showing different animals found in the park, including lions and pandas. A year later, the attraction expanded to over 450 lanterns with a fantasy theme. Among the lanterns of the Folktales and Fantasy Nights were faeries, a hippocampus (half horse and half fish), unicorns, kelpies (like the Loch Ness monster), and a 50-foot Qing Niao (a majestic bird from Chinese mythology).

The Giant Lantern theme of 2019 was Lost Worlds. Over 600 lanterns were displayed along a trail that covered more than half the zoo. Each year, all the lanterns are produced by hand in China and shipped to Edinburgh to show Scotland’s connection to China, along with the two pandas in the Edinburgh Zoo. The lanterns usually last for 10 weeks over the holiday season and are available in the evening after the zoo itself has closed down.

Walking Through the Dinosaur Trail

The trail of the giant lanterns starts at the “Dawn of Time” – a giant clock display with the hands turning backward, symbolizing turning back time 3.5 billion years to when life first began to appear on this planet. The “Explosion of Life” display has a beautiful tunnel of lights, balls, and the first creatures to swim in our oceans. Moving on to the “Surface World” lanterns, the first display consisted of three Pareisaurs lanterns, followed by a pair of Cotylorhynchus lanterns. These looked surprisingly like modern-day mammals, even though they predated most of the dinosaurs that we know. The next display was really cute. It featured 12 zodiac dinosaur egg lanterns, giving a dinosaur with a different color and traits for each month on the zodiac. While it might have been designed for kids, I enjoyed it too. I had an olive-green dinosaur bringing peace and prosperity. A primary feature of this year’s display was the volcano in the “Mass Extinction” section, located behind the dinosaur eggs. The volcano towered 32 feet in the air, with several smaller volcanos leading up to it. Along the trail were information panels describing all the different periods and dinosaurs. The lanterns might have been designed more for children, but the information given wasn’t exactly kid-friendly. The next section we walked through featured synapsid dinosaurs, and I’m still trying to wrap my mind around what they are (perhaps an over-simplification is mammal-like reptiles). I continued to walk around the zoo, following the trail which had the side paths roped off. Apart from the flamingoes and penguins, none of the animals were visible. The sun bear enclosure had the windows to their den boarded up, and not one monkey or meerkat was about. I couldn’t complain. Visiting the zoo is a full-day experience for daylight hours, and the lanterns take a couple hours to appreciate on their own. The next displays I passed through were titled “New Beginnings,” “Taking Flight,” “Feathered Forest,” “Chinese Skies,” “African Showdown,” and “Above the Clouds.” As much as I loved dinosaurs as a child, I didn’t recognize any of the creatures, but that didn’t make the lanterns any less impressive. If anything, they were even more fascinating due to their unknown nature. Within this section was the largest lantern in the display – a 65-foot-long snake with its jaws opened wide along the path. It made for some great photos if you wanted to stick your head between the teeth. I didn’t really see any signs saying not to touch the lanterns, although some of them were set at a distance from the path behind the ropes. Plenty of people were leaning into the closer lanterns for photo opportunities. I really liked the “Taking Flight” lanterns. They featured reptilian birds and the lanterns seemed to have more details and colors than any others in the exhibit. It wasn’t just the dinosaurs that were lanterns. Dozens of tree and plant lanterns were also created for the exhibit. In an unused exclosure (I think it used to house the seals), a large aquatic display was set up featuring dozens of sea creatures, plants, and a couple of larger amphibious reptiles. This display (as well as a few others) was interactive and the kids could press large buttons for different lanterns to light up. Finally, I came to the “Mega Herbivores,” featuring the T-Rex and Triceratops. I guess I was surprised that they didn’t make the T-Rex bigger, but that’s probably just the original Jurassic Park fan coming out in me. 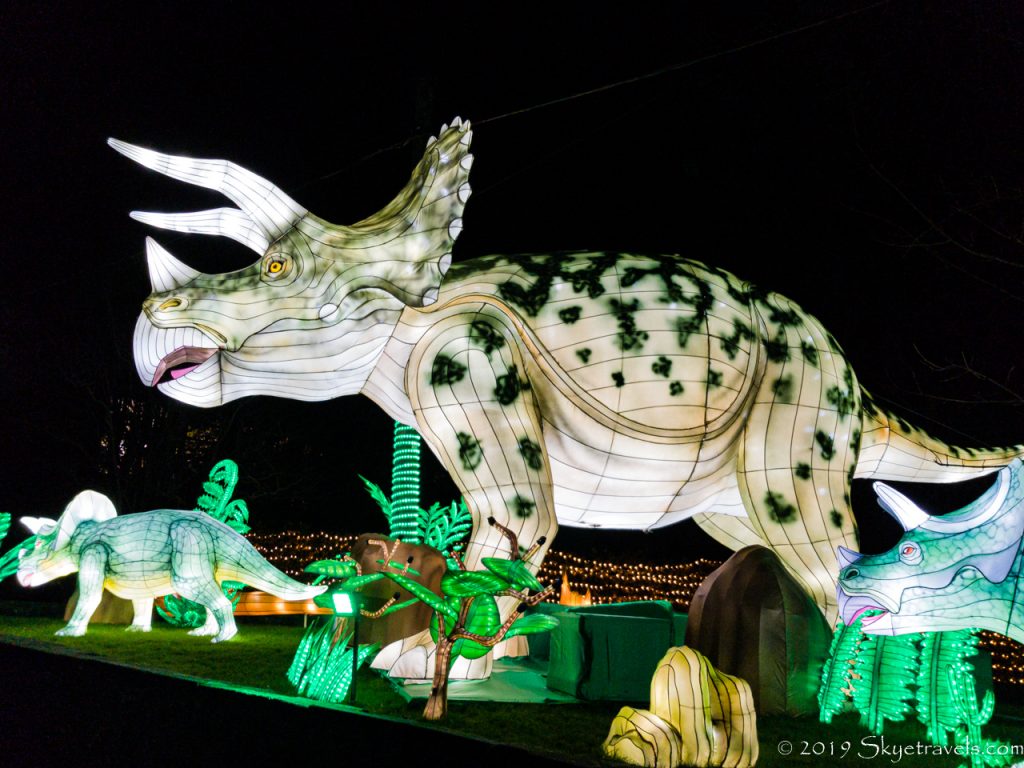 The final displays were “Asteroid Strike,” “Rise of Mammals,” “New Kingdoms,” “Marsupial Land” and “Age of Ice.” I loved all these sections, but my favorite lanterns were in the “Age of Ice,” including the wooly mammoths, bears, and rhinos. Before I arrived at the visitor center, one last big lantern display showed a clock bringing me back to present time. As a whole, the full exhibition was put together perfectly, covering all the different eras of dinosaurs. Sure, the intricate details probably went over the heads of most of the kids who visited. They were just fascinated by the lanterns while we adults were able to learn a thing or two. Visiting the Giant Lanterns at the Edinburgh Zoo

The giant lanterns are available to visit between the middle of November and the end of January. You have to book a time slot between 4:45 p.m. and 7:30 p.m. You can stay as long as you want until the attraction closes at 8:45 p.m.; the time slots are just to ensure everyone doesn’t all arrive at the same time. I’d recommend booking a later slot to avoid the bigger crowds, but not later than 7 as it does take a couple hours to appreciate the full exhibit. Also, arrive a few minutes before your slot as the parking tends to back up a bit. If you’re traveling to Edinburgh with kids during the holiday season, this is a great activity to add to your itinerary. Don’t fancy going to the zoo? Here are some other activities to partake in around Edinburgh.

End of the Year Report and Plans for 2020

How 48 Hours in Hamburg Made it My Favorite German City