Obidos is a beautiful medieval town in central Portugal that you simply have to visit if you’re in the country. It’s located about an hour north of Lisbon, and two hours south of Porto. At the center of this fortified, hilltop town is a castle dating back to the 13th century, although the Moors built a castle there in the 8th century, and Romans had a fort before that. In other words, the town is very rich in history.

I first time I saw Obidos was on my surfing trip to Portugal back in 2017, and I’m so glad I was able to return recently with Vanesa at the invitation of Center of Portugal to show her how beautiful it is. Obidos was our first stop on our week-long tour through Portugal, and it definitely set the stage for how beautiful the country is. We got some night shots, stayed at the beautiful Rio do Prado hotel down the street, and then returned the next day to really appreciate the town.

The Best Things to Do in Obidos 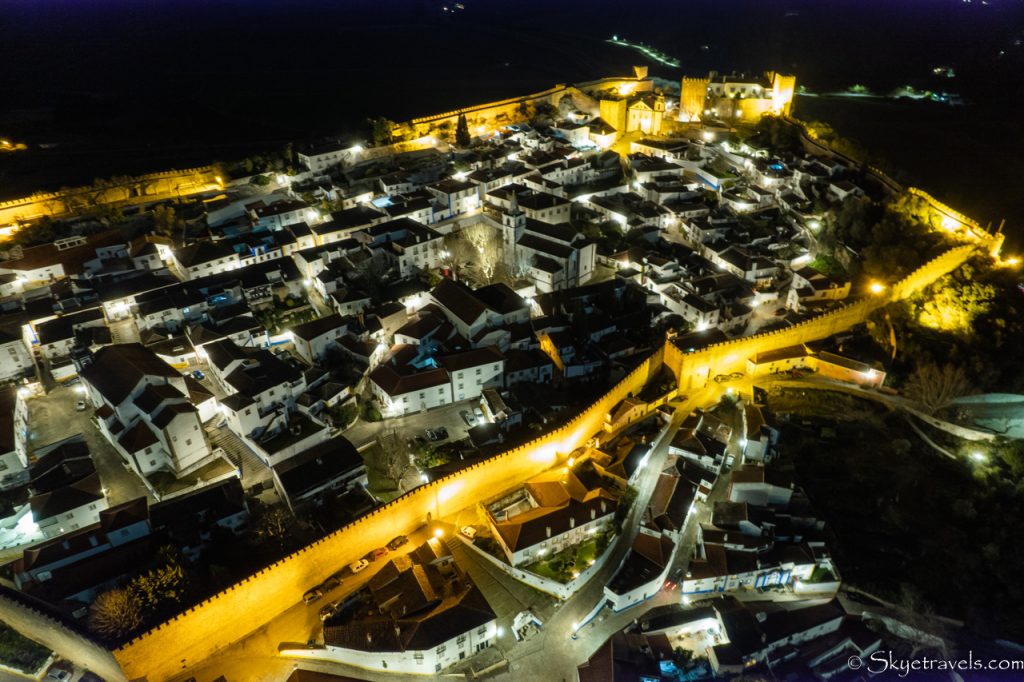 While it is possible to drive through the tiny cobblestone street Obidos, the town is really designed for walking. Once you get inside the fortress walls, the quaint streets are lined with local arts and crafts shops, cafes and homemade liquor stands.

The narrow old town center is less than half a mile long and only takes a few minutes to walk from one end to the other, although you’ll probably want to stop at all the interesting spots along the way. You can easily explore Obidos within a couple hours, but you could also spend the entire day there. 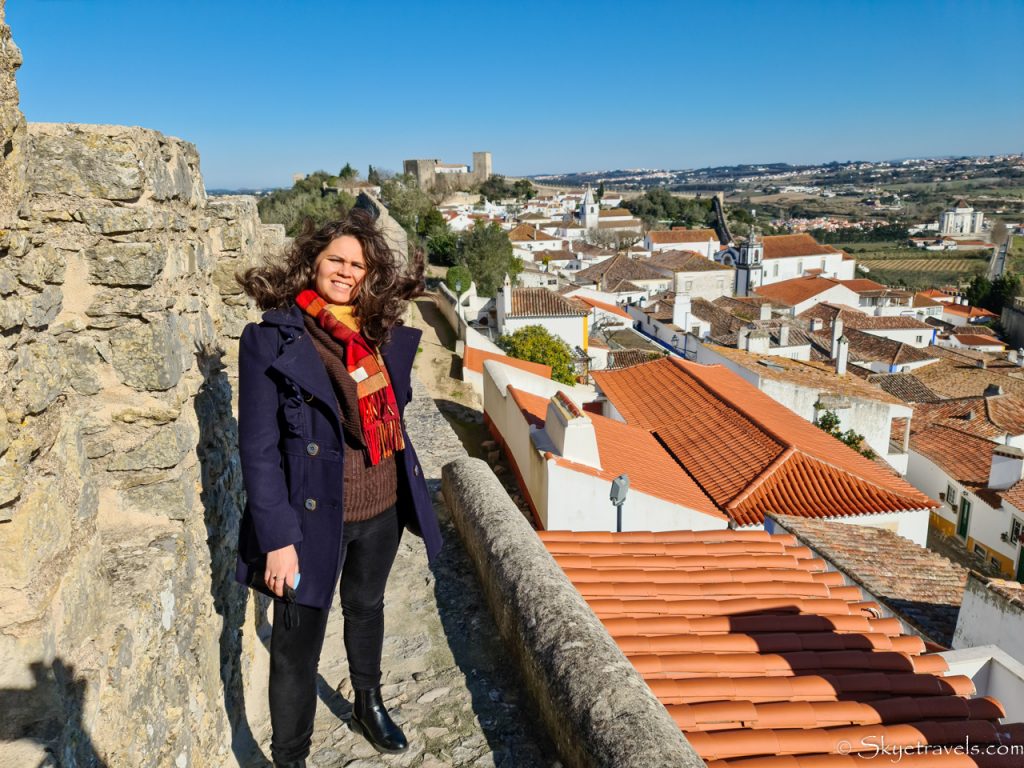 The well-preserved castle on the northern end of town originally dates back to the Romans, but was reconstructed by the Moors and then redesigned several times, beginning with the reign of King Dinis I in the 1200s. Now a couple rooms in the castle are part of a luxury hotel.

There are several stairs where you can climb to the top of the ramparts surrounding Obidos. If you’re afraid of heights, perhaps the walls aren’t the best for you, but Vanesa doesn’t like heights and she made it all the way around the town. There aren’t any hand railings on the inside of the wall, but it’s not a dangerous walk. There are several beautiful, old churches in Obidos. The main one is the Church of Santa Maria, located just a few feet south of the castle. The church started off as a Visigothic temple, was converted into a Moorish mosque, and finally became a Catholic church in the 1100s. The current design dates back to the 17th century after it was damaged in the 1535 earthquake. There are some amazing features in the church but rather than spoiling them, I’ll let you visit and see for yourself. There are many liquor stalls in Obidos selling a variety of different concoctions (including dulce de leche liquor). The most popular of the drinks is ginja. This sweet cherry beverage is one of the most popular liqueurs in Portugal, although you’ll hardly ever find it outside the country. It’s made with morello cherries (the sour kind), sugar, and special spices such as cinnamon and cloves. In Obidos, it’s common to get a shot served in a tiny chocolate cup.

Vanesa and I found a small stall by Porta da Vila selling shots in a souvenir cup for €2.50, or in a chocolate cup for €1.50. I got the chocolate cup for myself, and the vendor then gave Vanesa a free sample too. Traditionally, you get a pitted cherry in the cup to enjoy after you finish the ginja. I found it really nice – not too strong, and quite sweet. Perfect for a cold, winter day. Another one of the churches in Obidos has been converted into a really unique bookstore. It’s certainly not big, but beautifully designed while leaving the decor of the church intact. Nearly all the books are in Portuguese so unless you speak the language, you probably won’t be able to buy anything there, but at least you can look around. Portugal is known for azulejo, the typical blue-glazed ceramic tiles you see all around the country. While there is plenty of azulejo all around Obidos, one particularly spectacular spot is at Porta da Vila, or Village Gate. This was the main entrance into the old town, and there is a gorgeous mural on the eastern wall. The first time I went in 2017, there was a hang drum performer creating an awesome ambiance in the area.

If you’re looking for a good souvenir from Obidos, an azulejo magnet is a great idea. While Porta da Vila is more popular, there’s another gate in the eastern wall which is also beautiful. The Gate of the Valley, aka, Gate of Our Lady of Grace, dates back to the 1100s. It once had a sculpture of the virgin and child, which now sits in Saint Mary’s Church. I didn’t even see this gate on my first visit to Obidos, but now I can say it’s worth seeking out.

Read a Book in The Literary Man Hotel There are several luxury hotels in Obidos, but one of the coolest has got to be the Literary Man Hotel. The hotel is built for book lovers and has literally thousands of books lining the walls from floor to ceiling. Granted, many of the books are the same title (Dan Brown and Stephenie Meyer are most predominant), but there’s still a pretty impressive variety.

In the kitchen where you’ll find a buffet breakfast in the morning, the walls are lined with hundreds of cookbooks, and the restaurant has a large area full of children’s books. The rooms themselves aren’t full of books, but that doesn’t make them any less luxurious.

The Medieval Fair takes place every July, and I don’t understand how I missed it when I was in Obidos in July 2017. As far as I can tell, I just didn’t make it into the castle where most of the stalls are set up, or perhaps I just arrived a couple days too early. Either way, it’s just another reason to get back to Portugal.

For the month of July, the town is turned into a true medieval village. There are dozens of stalls set up to sell medieval roasts and other dishes of the past. The locals go full cosplay to look the part and participate in tournaments, weapon and armor crafting, and all kinds of other activities. You can even rent or buy your own costume to wear at the fair.

There are other festivals in Obidos throughout the year, including the Christmas village in December, a chocolate festival in April or May, and a literary festival in September or October. But your visit doesn’t need to coincide with a festival to enjoy the town. You’ll probably need a place to stay in Obidos. While the Literary Man Hotel is a nice option, I have to recommend their sister hotel – Rio do Prado. The hotel is located about 3 miles northwest of Obidos outside the village of Arelho.

Rio do Prado is not your typical hotel. There is a small reception attached to the restaurant and a common room with floor-to-ceiling, full bookshelves (just like The Literary Man). Otherwise, it’s more like a resort with individual cabin rooms. The large rooms are individually built into the hillsides and feature a king-size bed, a standalone wood stove, all the amenities you’d expect in a luxury hotel, and, best of all, an ergonomic relaxation bathtub. The master suite also has a full spa complete with massage table, sauna, and Turkish bath. One wall of the room/cabin is floor-to-ceiling windows with blackout curtains perfect for a lazy morning.

As the rooms are essentially cabins, you have direct access to them from your car, if separation and social distancing are important to you in these times. Otherwise, you can enjoy the swimming pool (mostly for the summer, but open year-round), the herb garden house, and the local crafts shop.

If you can’t stay at the hotel, you at least need to have dinner at the farm-to-table Maria Batata Restaurant. Throughout my week in Portugal, I was continually blown away by the culinary experiences I had, starting at Rio do Prado. Don’t get me wrong, I still love Italian food, but I think Portugal is even better, and a good deal healthier. The restaurant’s mission is to use the freshest local ingredient, herbs from their own garden, and zero waste.

As with nearly every restaurant in Portugal, our meal started off with freshly baked bread, organic olive oil, and fresh cheese made in Alfeizerão just a few miles away. We then moved on to a starter of fresh chili and coriander prawns. Portugal is known for its seafood, and we had several prawn dishes throughout the week, but these were by far the best and freshest of them all. The main course honestly blew my mind. I had pranceta de leitao com farinheira, batata doce, alface assada e laranja, which translates to “suckling pig with farinheira, sweet potato, roasted lettuce and orange.” Vanesa went with the fresh grouper on a bed of coconut risotto. The wine we chose was a 2015 Casa Das Gaeiras reserve. Obviously, I can’t accurately impart all the incredible flavors of the meal through words, so you’ll have to go and experience it for yourself.

Somehow, we managed to save a bit of space for dessert. I had the homemade almond cheesecake, which tasted like it was made with ricotta cheese rather than the typical cream cheese. Vanesa’s was a bit fancier – moist chocolate cake with ginja pears.

The next morning, the breakfast buffet was impressive, spanning the full length of the restaurant. We were in the first group to eat (guests are grouped into half-hour slots for social distancing) and more dishes kept coming out every few minutes. The options were nearly endless – scrambled eggs, bacon, pancakes, fresh fruits, homemade yogurt, meats, cheeses, dozens of different fresh pastries, and more spreads, nuts, herbs and other accompaniments than I’ve ever seen at a buffet. And everything of the highest, freshest quality. In a nutshell, our one night at Rio do Prado was a huge highlight in our week-long journey through Portugal, and we can’t wait to be back someday, preferably in the summer when we can use the pool and see the medieval festival in Obidos. Disclaimer: My endless thanks to Center of Portugal and Rio do Prado for inviting me to these amazing locations. As always, my views and opinions are completely my own.