Most people think of California or Tenerife when they think of Santa Cruz. If you Google the Santa Cruz in Portugal, you’ll get the town on Madeira Island. Yet there’s another one. Just an hour north of Lisbon is Santa Cruz, an idyllic stretch of sandy beaches, oceanside cafes and boutique hotels. Santa Cruz is also home to the annual Ocean Spirit International Water Sports Tournament and Festival.

Santa Cruz was the third and final town on my tour of central Portugal, although there were a couple other villages we saw in the vicinity. Here’s what my two days were like.

Through the Gate of Obidos

Before heading down to the next surfing destination of our tour, we made a detour to the ancient city of Obidos. Outside the wall of the city, we visited the Literary Man, a boutique hotel and cafe with hundreds of books everywhere. When I go back to central Portugal, I’d love to spend a few days there working on the blog, or just relaxing and reading.

We didn’t do an official tour of the town, but another member of the tour and I had a chance to wander around the narrow streets and find some pretty stunning churches and murals. The churches were real works of art, including the Misericordia Church and the Church of Santa Maria, dating back centuries. I was quite surprised when I ran across the Porta da Vila, or Gates of the City. The mosaic fresco is quite beautiful, even though most houses in Portugal have some kind of mosaic design. The hang drum performer beneath the arch was a nice touch as well. Upon the hill was the original Moorish castle from centuries ago that we could have gotten tickets for, but we didn’t have enough time for that. After walking down the market street and taking in all the sights, we jumped back into the van for our next destination.

Our next stop was a little difficult for our driver to find, since it’s exact location is a bit of a secret for security purposes. SPO stands for the Shaping Professionals Organization, currently a team of four guys – three from Australia and one from Brazil. The SPO produces boards for direct order and other companies at the highest standard. Their “factory” is one small building with separate rooms for the different stages of surfboard construction.

As it was a Sunday, none of the shapers were working. Instead, we were met by another man who gave us a full tour of the factory, demonstrating each of the stages of surfboard shaping, and how the digital age definitely has its role in advanced construction using the Digital Surfboard Design machine. He didn’t speak any English, but Jose and Joao were on hand to translate everything he said. I was really amazed at how much goes into one surfboard. A Big Octopus at O Navio

For a late lunch that day, we went to O Navio, a cafe right on the beach next to the Ocean Spirit Festival. If I had an entrée, I forgot what it was. The appetizers dominate my memory. We had the usual sardines and shrimps, but it was the scrumptious octopus we had seconds of. I’m not usually the biggest fan of octopus – it’s too chewy and…well…slimy for my taste. Not this one. Yeah, still a little chewy, but really well flavored and perfectly cooked. My love of Portuguese food went up yet another notch with this meal. I’m still trying to figure out why the town of Santa Cruz isn’t labeled as such on Google Maps. It certainly deserves to be. We spent the day walking along the beach, strolling through the Saturday market and seeing buildings that have been around for ages. I’ll admit I still liked Nazaré more with its quintessential Portuguese small town feel, but Santa Cruz certainly has the better beaches. The beach in Santa Cruz actually extends for miles along the coast and has several different parts, some of which are separated by rocky promontories. On the morning of the second day, I actually walked more than three miles along the beach from the hotel to the meeting spot in town. There were some really beautiful spots along the beach, including one section guarded by two rock walls and completely devoid of other people! For our first dinner in Santa Cruz, we went to the Noah Surf House Restaurant, also right on the beach. I don’t even know where to start. Our starters were the usual – clams, deep-fried octopus (or calamari), fried halloumi, and fish soup. As good as all the other meals in Portugal were, this one was even better. For our main course, we each had a tuna steak. I had no idea tuna could taste so good. I’d eaten so much of it growing up, I didn’t think I could ever like it again. Boy did that steak change my mind. The homemade potato chips on the side were a nice addition as well. For dessert, we had Portuguese flan. 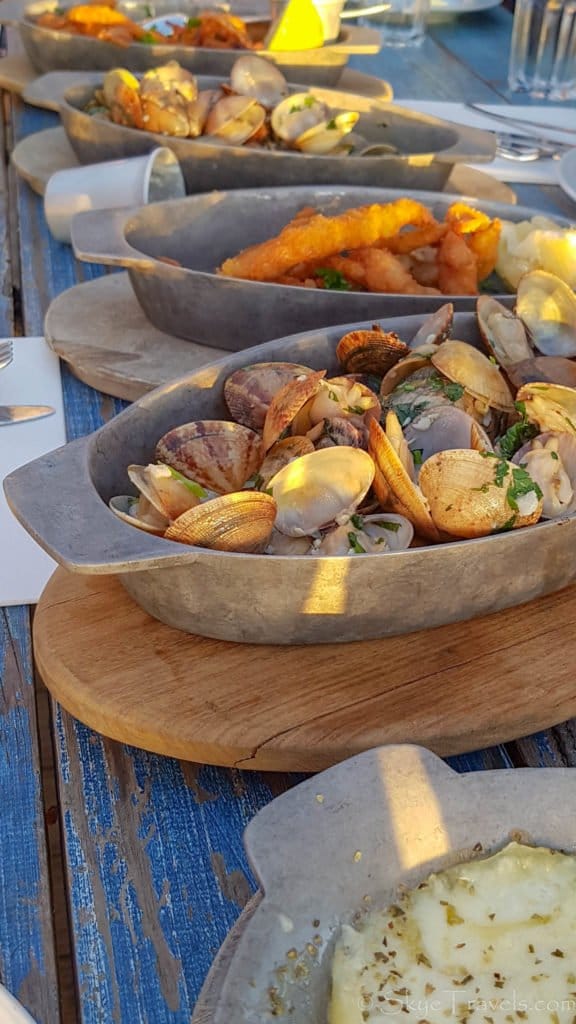 Of course, the restaurant itself was a work of art too. Gonçalo, the owner of the restaurant, is a huge fan of eco-friendly development. Very little paper or plastic is used in the construction or operation of the restaurant. The menus were on cork, the decorations were all local materials (fishing nets, driftwood, etc) and the atmosphere was cozy with live music in the background. We all would have been happy to have the rest of our meals in Santa Cruz at that restaurant. An Unexpected Festival in Vimeiro

I was feeling a little under the weather on the last day, so instead of going out to surf, Jose brought me out to the small village of Vimeiro. It turned out we landed in a small festival. I didn’t entirely understand the premise of the show. It seemed to be a reenactment of a battle that had taken place in the area, with representatives from all the armed forces that participated. They had actually come in from their respective countries in full uniform to participate. There was also a street market, which turned out to have the same stalls as we had seen the night before in Santa Cruz. We didn’t have a lot of time to spend, since the others were only planning to be out on the water for an hour or so. As it was, they were waiting for us when we got back. That evening, we ate at the Ocean Spirit event hall. For 11 years, Santa Cruz has been hosting the Ocean Spirit Water Sports Tournament. Surfing is just one of the sports. There is also kite surfing, paddle boarding and several others. We watched some of the heats, and then met some of the performers at dinner. We also met the two creators of the Ocean Spirit, a truly dynamic pair who have successfully put Santa Cruz on the map. Well, almost. My First Bali Massage at the Well Hotel and Spa

For the two nights we were in Santa Cruz, we stayed at the Well Hotel and Spa. When I say it was a truly amazing place, it’s not because it was part of the package. I really did enjoy every part of the hotel, especially their epic breakfast buffet. The best part was obviously the Bali massage I had – my first ever. They deserved their own post to do them justice, which you can read here. Setting the Standard at Areias Do Seixo

On our final day, we had a few extra minutes for two final stops, both of which are managed by the same owner as the Noah Surf House Restaurant. The first was the under-construction hostel and bungalow residence which overlooks Santa Cruz beach. The second was the Areias Do Seixo, a boutique hotel which, in my opinion, sets the standard as an ideal accommodation. Read all about their eco-living, nature-friendly, healthy lifestyle here. And that was the end of the tour. From there, we drove back to Lisbon, and I took my flight back to London on TAP airlines, just in time to start my house sit in Brighton, England.

Disclaimer: My endless thanks to Visit Portugal, Madomis Tours, Naturexperience, SPO, O Navio, Noah Surf House, Ocean Spirit, and Well Hotel and Spa for inviting me to these amazing locations. As always, my views and opinions are completely my own.

Journal Entry: A Wild Blablacar Ride from Chisinau to Odessa Via Transnistria