Prague, also known as Praha, Praga and Prag. For years I heard it was the most beautiful city in Europe. After seeing it for myself, I’m tempted to agree. There are plenty of amazing things to do in Prague.

Prague is the fifth most visited in Europe. For good reason. With the largest castle compound in the world and a plethora of other sights, it’s a wonder to behold. The unending amount of tourists might make it a little more difficult to enjoy for a traveler like me, but it’s one of those places where you can explore for days and still not be able to see everything. It was also the fourth city I visited in a row after Budapest, Bratislava and Vienna where the historic city center was a UNESCO World Heritage Site.

First of all, let’s get one thing straight, especially for any Americans reading this. Prague is in the Czech Republic. Not Czechoslovakia. That country hasn’t existed since 1992. Prague is also the capital of the historical region (not country) of Bohemia. The Czech Republic is the country that sticks into the east side of Germany beneath Poland. Possibly their biggest claim to fame is they have the highest beer consumption per capita in the world at 148.6 liters annually! That’s almost 40 gallons, or a pint every day of the year. There are nearly a hundred hostels in Prague. Many of them have rooms for under $11. Don’t forget that this is the fifth most visited city in Europe. The hostels fill up, especially in the summer. My own reluctance to book ahead (and lack of a working mobile device) got me into trouble here and I spent nearly five hours walking from hostel to hostel trying to find one that had a bed available. The first hostel I booked was A&O Hostel. It’s actually a budget hotel, but some of their rooms are set up as dorms with half a dozen people inside. The cost is $11 a night. Good service and facilities, just like a hotel, but 20 minutes outside the city by metro. Plus it’s hard to find once you get off the metro.

I also stayed at the Budget Hostel. It only operates in the summer since it’s actually a school where they turn the classrooms into dorms with mattresses on the floor and the showers are in the gym. Not exactly the nicest place to stay, but for $5.50 a night it was worth it. Plus it was in the heart of town and close to the train station for my 6 a.m. trip to Krakow.

Prague primarily has German cuisine, but there are some special foods that you should know about and try. Most meals have soup as the first course and a meat dish as the second. But there is a large variety. A complete list of meals can be found here.

For breakfast, try a kobliha (chocolate or custard-filled donut with sugar on top) or a kolác (yeast cake with cheese, jam or poppy seeds). Lunch is the main meal in Prague. Almost all the restaurants have discounts between 11 a.m. and 2 p.m. If you follow my advice and get a non-tourist restaurant, you might have trouble deciphering the menu and getting help from the waiter on what to order. Some ideas are svíčková (marinated sirloin), guláš (a stew, not to be confused with Hungarian gulyás) and vepřo-knedlo-zelo (roast pork with dumplings and cabbage). Personally I simply had a párek v rohlíku (Czech sausage) for lunch, and a sandwich from a deli for dinner, with snacks from the local market throughout the day to save money.

Frankly, there’s too much to do in Prague to list out and keep this article under a couple thousand words. There are a couple dozen major museums to visit and many smaller ones. The Czech National Museum is closed until 2017, but there are plenty of others to visit. It just depends on your tastes. You can see the Communist Museum (next to McDonald’s, of course), any of the art museums or even the only Sex Machines Museum in the world, if that’s your thing (not for me). The Astronomical Clock in the Old Town Square is considered to be the most overrated tourist attraction in Europe. The 15-second show might not be impressive by current standards. When you consider that this clock is over 600 years old and still operating flawlessly not only for the time but also the Zodiac symbols, the position of the sun, the position of the moon and several other functions, it becomes pretty amazing. Prague Castle, as a castle, might be hard to locate. The ornate building on the hill is actually St. Vitus’ Cathedral. The castle surrounding the cathedral is rather ordinary looking, but it’s on record as the largest palace compound in the world. You might want to take one of the walking tours for $11 to explore it, or you can go on your own and wander around like I did. Either way, it will be several hours well spent. Charles Bridge is maybe a little too famous. Depending on when you go, you’ll have trouble getting across with all the tourists sharing the same agenda. If you wait until night, you’ll have a much easier time of it, and a much more beautiful view too with the castle fully illuminated. I should also comment on the synagogues in Jewish Town, specifically Klausen Synagogue, Pinkas Synagogue, the Spanish Synagogue and the Old New Synagogue. When Hitler tried to obliterate the Jewish community in Europe and the rest of the world, he wanted to leave behind a museum of Jewish life, so he left the Jewish Quarter in Prague fairly intact. The history of these churches is a creepy and sad story, especially when you see the 4500 children’s drawings recovered from Auschwitz on display at the Pinkas Synagogue.

My Crazy Adventure in Prague

I arrived in Prague on the 13th of August on a bus from Vienna around 3 PM. Purchasing a metro ticket, I rode to the New Town where I was told most of the hostels were. I found one hostel, Chili Hostel, but was told they were fully booked. I then checked several different hostels in the area, including the 400-bed Equity House, only to find no empty beds. Finally, I used a computer at Chili Hostel to book a room at the A&O Hostel, almost outside the city limits.

I can say that dragging around a 30 kg bag for five hours in the city, and then getting lost three times trying to find my hostel after I got off the metro was a trying experience. It was one of those times which really made me consider slowing down and having a home base to stay at for a couple months, and then spending at least a couple weeks in each city, maybe even renting an apartment or something. Rest assured, I’ll be spending at least a couple months in Edinburgh at the beginning of next year.

The next day I got up early to get to the free walking tour in the city center. When I arrived for the 10:45 tour, I was told the tour started at 10, but there would be another at 2:30. It turned out that it was a different tour than the one I was trying to get to. I had been looking for the Sandeman Free Walking Tour but ended up with Prague Royal Walk Free Tour. The next day I correctly located the Sandeman tour. Between the two tours, I was able to see nearly all of the Old Town of Prague. Amazingly, the two tours overlapped very little. I would recommend other travelers take both tours to get a full picture of the city. After the tour on the first day, I continued to walk around the town, meeting a local to find out where a good place to eat was, seeing Wenceslas Square and the outside of the National Museum (since it’s closed until 2017) and strolling through some of the parks. It was very tempting to go to Don Giovanni at the Estate Theater, the very same theater where Mozart himself premiered the opera over two hundred years ago. On the second day, after the Sandeman tour in the morning, I used the Prague Free Map for Young Travellers Made By Locals. This map gives an alternate tour through Prague, including several parts that aren’t covered by the walking tours. It starts down by the Dancing House, and makes a whole circuit to such places as Prague’s Venice (Kampa), Lovers’ Hill (Petrin), the Beer Monastery, the Pilgrimage of the Past Times (Lorenta), the Jewel of the Czech Lands (Prague Castle) and then back into Jewish Town, the Old Town Square and the Municipal House in Namasti Republiky Square. The walk is supposed to take three hours, but I spent longer at the castle since I hadn’t done a walking tour up there and wanted to see all of it. It also kept me out of the old town center where the Prague Pride Parade filled the streets to capacity, making getting around the city nearly impossible. Finally I checked into the Budget Hostel, choosing my mattress on the floor in a schoolroom and getting a few hours of sleep before rising at 6 a.m. to catch my 7 a.m. train to Krakow. My final adventure before leaving was walking through the city in the rain which had started couple hours earlier. For the record, a cold, rainy Prague devoid of tourists was the most beautiful way to enjoy the city. Especially after the previous two days had been in the low 40s!

Simply put, Prague is impossible to summarize in this brief post. I’ve tried to give a synopsis of how to visit on a budget for an adventure traveler. The truth is that this city should really be explored for a few days, some of the paid attractions (such as Prague Castle) should be included in your visit and it’s probably a city you should experience with a companion, especially for those times when you get lost trying to find your hostel and you need a friend to find something to laugh about with.

I actually used three maps while I explored the city (partially required by my tablet needing to be repaired). I found this is a great way to discover new things, as there might be locations covered on one map and not another. Some maps have great descriptions as well, almost circumventing the need for a free walking tour. But honestly, I would never say skip the tour. Prague’s tours are invaluable to get a full picture. I would also recommend taking the paid castle tour, even though I didn’t do so myself.

Talking with others, I found that Prague is always full of tourists. As mentioned above, it’s the fifth most visited city in Europe. Should that put you off? No way. The city really is beautiful and amazing. While I personally don’t think it’s the most beautiful I’ve ever seen, you might. You’ll just have to go and see for yourself. 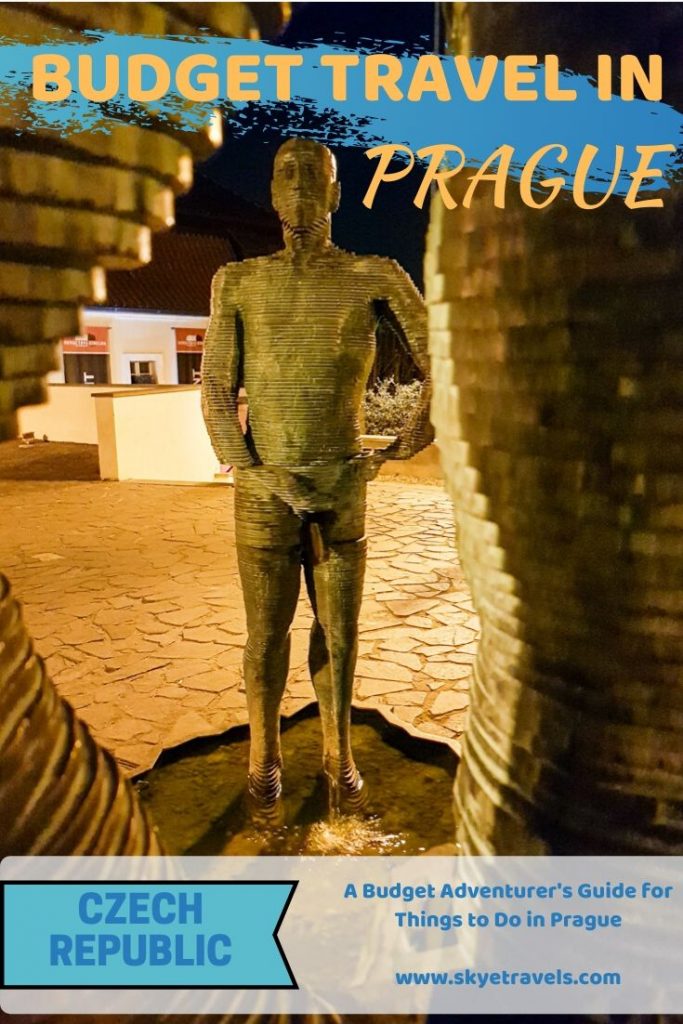 Are you visiting the Czech Republic and looking for more activities? Here are some other articles to help you out.

Beautiful Vienna is More than Music

Who Knew Krakow Is So Beautiful?