San Telmo is one of the oldest of the 48 neighborhoods (barrios) in Buenos Aires, Argentina, and one of the most interesting to explore. Vanesa and I only spent the better part of an afternoon there, but we found some really interesting things to do.

What is San Telmo

Vanesa was highly excited to show me San Telmo, particularly because she had barely explored the neighborhood herself despite growing up in Buenos Aires.

We entered Buenos Aires by train through Puerto Madero, another neighborhood Vanesa had never been to. Puerto Madero is the upscale, modern district of Buenos Aires, full of skyscrapers, fancy hotels and restaurants, and an ecological reserve. Comparatively, San Telmo is a tiny neighborhood, spanning only about 8 by 9 streets. There’s a large park in the south, a famous square in the center, and several museums and churches. By far the most interesting feature of San Telmo is its history, as it was one of the first settlements of Buenos Aires, dating back to the 16th century. And the best place to explore that history is at El Zanjón.

El Zanjón is a fascinating attraction. It was “discovered” in 1985 when a local businessman purchased a derelict building to turn it into an upscale restaurant. While renovating the building, he discovered the true history of the structure and the forgotten tunnels beneath.

As mentioned, San Telmo is one of the oldest neighborhoods in the city, but El Zanjón shows the history might actually date back far earlier than commonly agreed upon. There’s evidence a settlement existed at the site back in 1536, but the full ruins have yet to be found. 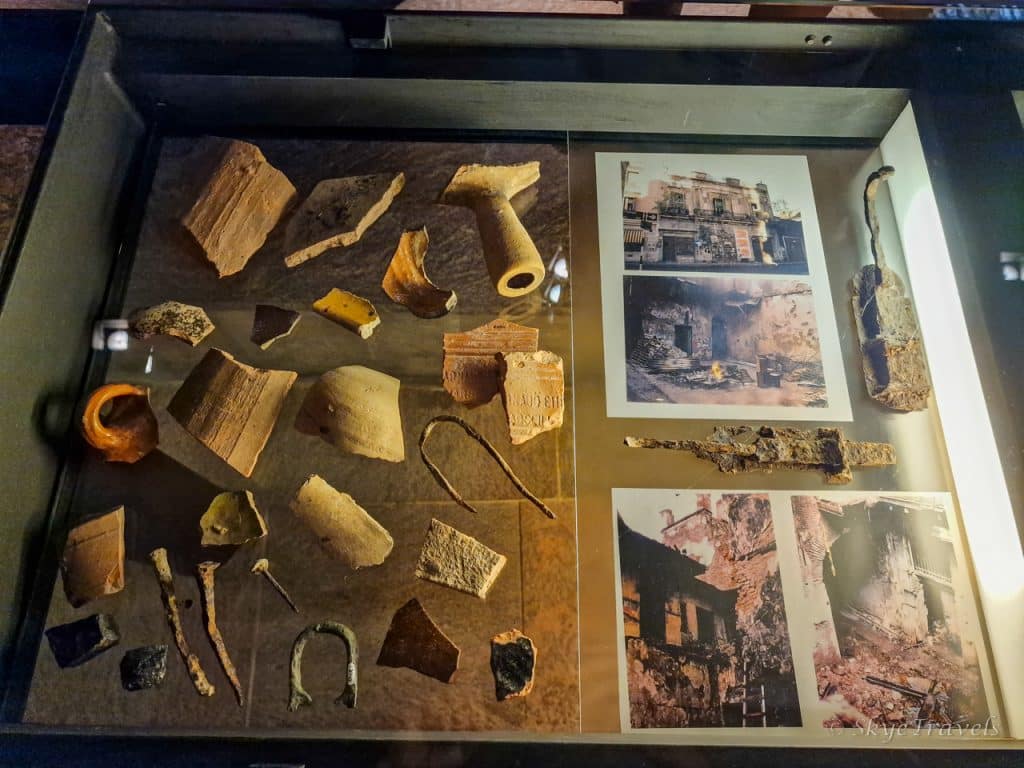 The current building dates back to the 17th century when the neighborhood was called San Pedro Heights. One of the wealthiest and most influential families built their home along the two rivers that ran through the city. By the turn of the 20th century, it was a tenement building for several families, and after that shops opened on the ground floor. By the time the building was purchased in 1985, it was a ruined shell with collapsed floors and nearly 15 feet of rubble on the ground level.

Since 1985 and the discovery of the old foundations, El Zanjón has been turned into a private museum where visitors can see the restorations of the original house. More importantly, the old tunnels that were built over the original rivers of Buenos Aires have been recovered and preserved.

Our tour consisted of about 15 people. Thankfully, unlike many of the other tours I had in Argentina, it was delivered in English. We were led through the house and given the history of various rooms. I found it interesting how the excavations found the middle of three courtyards was always dry after rain. That led to the discovery of still-functioning pipes leading to an underground cistern, which in turn led to the discovery of the tunnels. Easily my favorite part of the tour was the underground caverns and tunnels. Quite a bit of work has been done to excavate and rebuild them, at least as much as was feasible. Some parts of the tunnel are still under private homes to which the museum doesn’t have access. There was even one part of the tour we weren’t supposed to take photos in because it was private property.

The tour lasted about an hour. At the time of our visit, it was about $8 for me as a foreigner and $5.50 for Vanesa as a local. But prices in Argentina are always in flux, so check the El Zanjón website for current admission fees.

One attraction we missed was Casa Minima. It’s the narrowest house in Buenos Aires. It used to be a house for freed slaves, and there were many more around Buenos Aires, but Casa Minima is the only one left.

It’s only a couple streets away from El Zanjon, and we could have purchased a ticket to see both attractions. However, we were told the house was overrated. We were told to just get a photo from the outside, but then we forgot to do so after our tour, as we could only think about grabbing lunch.

There isn’t a central market anymore in Buenos Aires. Where it used to be is now a shopping mall. But there is the Mercado San Telmo. It’s rather small, especially compared to other central markets I’ve been to such as in Merida, Mexico, Barcelona, Spain, and Florence, Italy. Less than half the stalls were open, and those that were operating had a minimal selection. Perhaps the biggest store was selling spices. Other stalls sold meats, vegetables, and alfajores (Argentinian cookies). Later, I found that the central market in Mendoza, Argentina didn’t have much more to offer either, and I missed going to the one in Cordoba. On the south side of San Telmo is a small square called Plaza Dorrego. Perhaps it was because we showed up on a weekday in the offseason, but there wasn’t a lot going on in the square while I was there. A couple of stalls were selling arts and crafts, and that’s about it. I think the best thing about the square was the Iceland heladeria on the corner – one of Argentina’s best ice cream parlors. If you wander around some of the shops and alleyways near Plaza Dorrego, you might find some hidden gems, such as an iconic “umbrella alley.”  If you’re looking for the umbrellas, visit Feria de San Telmo across the street to the east of the square. Sundays are a whole different matter in Plaza Dorrego. That’s when you’ll be able to see the San Telmo Sunday Market. This market has been around since the 1970s and has over 270 stalls of arts, crafts, and antiques available to peruse.

The Sunday Market actually starts in Plaza Dorrego and then extends twelve blocks along Defensa Street north of the square all the way to Plaza de Mayo. That’s another attraction to visit. Plaza de Mayo is west of the Pink House – the presidential offices of Argentina. Yes, just like the White House in the US, but pink.

For years, I was told that Buenos Aires was rather unsafe. It was suggested that I should keep my phone hidden, and not carry any valuables on me. As such, I didn’t take a lot of photos or videos walking around.

However, after several weeks in Buenos Aires and other parts of Argentina, I found the city no more dangerous than London, Rome, or Kuala Lumpur. Perhaps less so, as Buenos Aires is actually now considered one of the safest cities in South America.

Regardless of how safe or unsafe the city is, it’s always good to exercise precaution. Don’t have loose objects in your pockets that are easy to grab. Keep a firm grasp on your phone, bags, etc. at all times. Take extra caution at night and when not a lot of people are around. You know…the basic security actions.

If you’re looking for a beautiful church, I’d suggest visiting Santo Domingo Basilica. Technically it’s just outside of San Telmo to the north, on the way to Plaza de Mayo. I always love finding beautiful churches around the world, and Argentina certainly has plenty. Characters on the Streets

All around San Telmo are several dozen statues of cartoon characters from popular shows in Argentina. I didn’t recognize any of them, but Vanesa was excited to take some selfies with them. Unfortunately, there weren’t any English descriptions. Where to Eat in San Telmo

San Telmo is small and many of the places to eat looked quite touristy, and therefore pricy. However, Vanesa and I found a great street food vendor for lunch. Just up the street from El Zanjón is a place called Parrilla del Carmen. The two options on the menu were choripan (a chorizo sausage sandwich) and bondiola (a pork shoulder sandwich). The price was reasonable and the quality was really good. You can also order fries or choose from a small drink selection.

Of course, you can’t visit Argentina without trying the ice cream, locally known as helado. There’s an excellent chain in Buenos Aires called Iceland, and one of the branches is across the street from Plaza Dorrego. Vanesa’s got her favorite flavor, sambayón (zabaione) – custard and marsala…kinda like tiramisu without the coffee and ladyfinger cookies. I like the fruity flavors better, such as lemon and coconut (not together), although that time was mint and chip, and dulce de leche with almonds. Don’t forget that San Telmo isn’t the end-all of Buenos Aires. Make sure to explore the other neighborhoods including Palermo, Retiro, and Puerto Madero. As San Temlo is small, you can easily explore it in a day or just an afternoon. But it should be explored. Don’t forget to put this little neighborhood on your itinerary, and try to make it on Sunday for the market.