If you’re visiting Verona or Trento and want to get out of the city for some relaxation, allow me to suggest Riva del Garda on the northern shore of Lago di Garda. This old village has a few spots to explore, but more importantly offers a chance to just slow down and enjoy the view.

Getting to Riva del Garda

Riva del Garda is between the cities of Trento and Verona. There’s no train station, but you can take a train to Rovereto and then a bus to Riva del Garda. If you’re traveling from Trento, I’d recommend taking a bus straight there. The ticket is €3.35 ($3.75) and is good for six hours, which is perfect if you’re just planning to go for the afternoon. Make sure to download the Open Move App to purchase your tickets, and then just ask anyone at the central bus station to direct you to the correct platform for Riva del Garda. The ride takes about 75 minutes.

Of course, you could always spend a couple days or more in Riva del Garda, which would be a great idea if you’re going for the relaxation. I was only there for the afternoon, so this is a guide on how to explore the town in a day. For me, the main attraction of Riva del Garda was the Apponale Tower. Built in the 13th century, it served as a watchtower and icon of the town for centuries. Now it’s a tourist attraction where you can get great views of the town and the northern part of Lago di Garda from the top. Depending on the day, you might be able to see sailboats on the lake, paragliders high up Monte Baldo, or perhaps a thunderstorm on the horizon. While I was there, it was the sailboats with Monte Baldo hidden in the clouds and an overcast day that never quite made it past a light drizzle.

There are 165 stairs to climb, but it’s an easy gradient. Once you get to the top, there’s a large platform where you can get panoramic photos. Of course, it’s mostly the roofs of the town that you’ll see, but even those can be interesting…especially when you spot a Barbie Doll stuck on one of the chimneys! 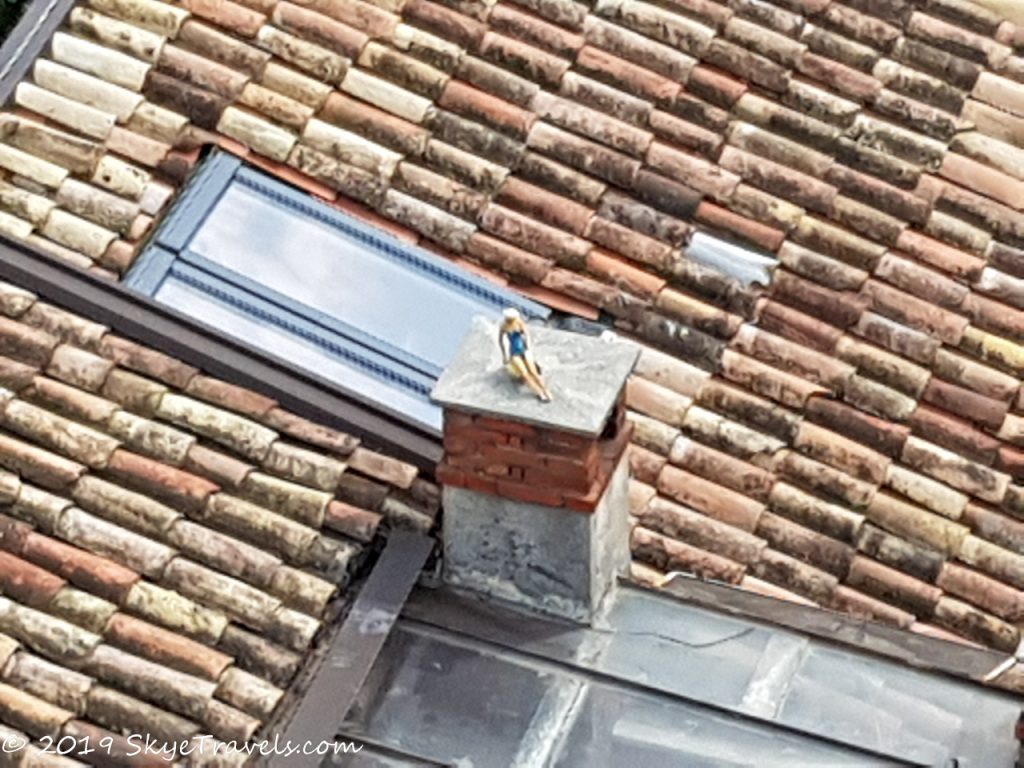 There are some really good museums in the Trentino region of Italy. The MUSE (Museum of Science) is in Trento, Rovereto has the MART (Museum of Modern Art), and Riva del Garda has the Museo Alto Garda (Museum of North Garda), or MAG for short. This museum is in an old fort on the harbor and has three huge levels to explore, plus its own tower you can climb for another view of the town, although this one isn’t as tall as the Apponale Tower. While some of the exhibitions were only in Italian, I still learned a lot. On the first floor was a (possibly temporary) exhibit about the history of sporting activities in Riva del Garda, including boating and diving. The old diving platform still stands at the entrance of the harbor. I wanted to go jump off of it, but it seemed it was no longer used for that purpose.

Another floor went into extensive detail about Riva del Garda’s role in World War II. There were tons of photos showing the destruction of the town, the German occupation and the resistance. Thankfully it didn’t follow the same fate as Warsaw when they attempted their uprising.

Rather than giving away the whole museum, I’ll let you explore it on your own. Tickets are €5 ($5.61), but you can get in for free (and to the Apponale Tower too) with the Trentino Card. Opening hours are 10 a.m. to 6 p.m. Tues-Sun. I’ll admit I was a little tight on time and kinda rushed through the museum, but I think you could spend a couple hours there looking at all the different displays.

As I’m wont to do, I spent a good hour wandering the streets trying to find a good restaurant for lunch. The problem is that most Italian restaurants shut down from about 2-6 every afternoon, and my selection was limited. Finally, I walked down a side alley and found a small cafe offering a wide range of entrees. A moment later, a lady came out to usher me to a seat. Now, normally I would avoid a restaurant that did that like the plague. But she was so effusive and welcoming, how could I say no? Besides, when would you ever turn down an Italian mother offering to cook for you.

She said she’d cook whatever I wanted, and then gave me a deal I couldn’t resist (well, I could have since I watch my budget, but I didn’t). For €10 ($11.22), I got a plate of spaghetti with mushrooms and cream sauce, and a glass of white wine on the side. Many of the restaurants I saw in Riva del Garda were serving entrees above €10 without the wine. I think you could consider this a holiday city after all, so things are more expensive. I had found one simple restaurant (think Subway for paninis and pasta) where I could get spaghetti for €7. Caffè del Centro was so much better! I might be a self-stylized food aficionado, but I couldn’t tell you what made her spaghetti so delicious beyond that it tasted like fresh, homemade pasta, the cream sauce was nowhere near as rich as other places make it (which I like), and the wine seemed to be a good vintage (I’m certainly not a wine connoisseur). The meal also came with an espresso at the end. They often do such in Italy, but you’ll have to pay for it in the bigger cities.

Relaxation on the Harbor

Riva del Garda is a quiet town, and just going there to relax is a great idea. Head down to the harbor and walk along the various jetties and quay. I went to the one at the opening of the harbor and watched the sailboats go by. There are also several hikes leading up into the hills, but I didn’t have time to do any of those. Returning for the Funicular and Ferry

Speaking of things I didn’t have time to do, there are two ferries that ply the waters of Lago di Garda. One runs the full length of the lake. The other just loops around the northern end of the lake. I would have loved to take that ride, but I’ll just have to save it for next time. That’s the law of the traveler after all. Another attraction which was under construction while I was there is a new funicular up the side of the mountain next to Riva del Garda. Well, it certainly looked like a funicular, or perhaps they were renovating an old one. Either way, it wasn’t open, so I have yet another reason to go back. When I do, I’d love to stay for a couple days and also get in a couple of the hikes. Perhaps I’ll see you there. An Honest Review of the Verona Hop-On, Hop-Off Bus Tour