Last week I left Seattle after an amazing five weeks, drove to Portland, and then continued out to the coast where I drove all the way down to southern California on the PCH (Pacific Coast Highway), and then back up to Oakland! Altogether, it was over 1500 miles of driving in one week. This is just one of those great stories about my travels, not necessarily a travel guide. Not that you wouldn’t want to follow in my footsteps on this amazing journey.

The first segment on Friday was the hardest in terms of driving. I had to get my motorcycle back down to Portland from Seattle, nearly 200 miles away. Not the longest drive I’ve done, but it was raining the whole way. I was able to stay warm, at least until the last fifteen minutes when the sun set and the temperature plummeted. Luckily I was able to leave all my bags in my host Kristin’s car, as she drove down with me to spend the weekend in Portland together. It rained the entire ride, but it wasn’t until the last fifteen minutes and the temperature dropped significantly when I really started to have trouble. When I say I don’t get cold easily, it doesn’t cover extremes!

That night after recovering from the ride, Kristin, dad and I ate at Saburo Sushi in Sellwood, which I mention in my post on good food in Portland. For dessert, we stopped at Nectar Frozen Yogurt, one of the best froyo places I know, and always with different, amazing flavors. Saturday started with a hike to Multnomah Falls, the second-highest waterfall in the USA. The 1 1/4 mile hike to the top of the falls was wonderful, and a great way to start the day. It was raining a little (it is Portland after all) but not enough to prevent us from thoroughly enjoying the hike. On the way back into town, we stopped at Tea Chai Te, also mentioned in my post on good food in Portland. If you’re a fan of good teas, this is definitely the place for you! Over 100 teas to choose from, and every flavor is in a glass vial on the wall for you to smell before ordering. Kristin and I both got the coconut chai, although she had soy milk in hers and mine had coconut milk.

Next we explored downtown Portland, specifically in the Pearl District. We went to Pioneer Square and Pioneer Place, Director Park and toured the food trucks. As a point, the food trucks are actually some of the best food in Portland, and in the whole US for that matter! We shared a “Hot Brie” from The Grilled Cheese Grill Food Truck. Soooo good! Finally it was time for dinner. We went to a long-time favorite of mine – Marrakesh Restaurant. Aside from the food being absolutely heavenly, the experience alone is worth the visit. I’ll admit it wasn’t the same now that they give you silverware to use (it used to just be finger food), and the short stools aren’t as comfortable as the pillows they used to have. Still, it was an unforgettable night. First, you put your hands in the middle of the table over a pan where they pour rose water over them and then give you clean towels. The five-course meal starts with lentil soup, followed by a Moroccan salad (diced cucumbers, eggplant, tomato, etc), and then b’stilla royale. The last, also called pastilla, is a pastry filled with shredded chicken, egg, almonds, cinnamon and covered with powdered sugar. Served hot and eaten with the fingers, it’s amazing! Then the main course. I had lamb couscous, while Kristin ordered the vegetarian Moussaka. Finally they bring out the dessert – Moroccan fruit salad. One more cleaning of the hands, and the meal wraps up with mint tea. Also, if you time your dinner right, you’ll also get a belly dancer show! How do you beat that?

Just to fit one more activity into the day, we went to a comedy show at Al’s Den, getting there early enough to catch the end of a jazz performance. The comedy show was amazing, with the same host that was there last year when I went. Kristin and I laughed hysterically the whole time. Well, almost. There was one guy dressed in a kilt causing a disturbance and the comedians didn’t handle him in the best way.

Day 3 – Tillamook to the Devil’s Punchbowl

On Sunday morning, the car was packed for the big road trip. Our first destination was the Tillamook Cheese Factory. There we took the self-guided tour, tasted the different types of cheese and divulged in their premium ice cream. I may have gone a bit overboard with my five-flavor sampler, but I do love ice cream! Next we went to a favorite childhood destination of mine. Pacific City and Cape Kiwanda. There is a huge sand dune you can climb up with spectacular views from the top. I was surprised to see how much it had eroded since the last time I was there. What used to be a huge plateau at the top of the dune is virtually gone, replaced by a steep drop into the sea. Not the safest place, as evidenced by the several people who got swept out to sea while we were there and who had to be rescued by the coast guard.

Finally, it was time for Kristin to return to Seattle. But it wasn’t goodbye, merely a “see you later.” After all, there are never truly any goodbyes, and definitely not with Kristin! My dad and I had a little fun on our southern Oregon road trip segment, getting a little lost on the logging trails when a portion of the highway was shut due to landslides and we didn’t want to backtrack 100 miles to the recommended detour road. Eventually, we made it as far as the Devil’s Punch Bowl in Otter Rock. We parked near the beach and slept in the car, listening to the sound of the surf and enjoying the stars. You might think that sleeping in a car is uncomfortable, but I beg to differ! On Monday, we continued down the coast on the 101 Freeway catching all the sights (which incidentally included a unicyclist riding down the highway). We hit a bit of a snag 11 miles north of Florence where a landslide had washed away the freeway (a common occurrence on the PCH). We were directed to go back up the coast 20 miles to Waldport, and then make a 164-mile detour to get around to Florence! Instead, we found a logging trail, unpaved, which weaved through the forest and managed to get to Florence after only 32 miles! And that was even after the ranger at the roadblock said we wouldn’t find our way on the logging trail. Google Maps definitely works better in the USA than in the jungles of Thailand. 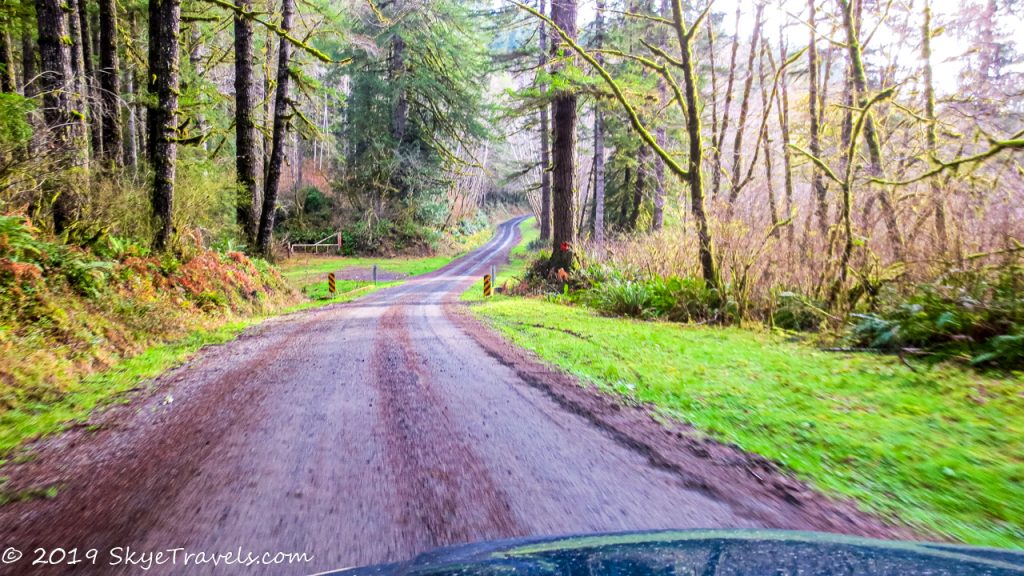 From there, we continued all the way down the 101 to Novato, California where I stayed with my very first Couchsurfing host in 2014. When I texted her that day, she happily accepted us on her two big couches, even with the short notice. The funniest part of this whole story happened there. Early in the morning, I felt a hand pawing at my face and shoulder. When I asked my dad what was happening, he asked where the cat was. Ummmm…

We got up early on Tuesday morning and stopped to get some great photos of the Golden Gate Bridge. It seemed we got really lucky with traffic; the last time I went across the bridge it took me over an hour inching along the bridge at night. Finally we branched off from the 101 and continued on Highway 1. Here I found out that what I had been calling the PCH was actually incorrect. Supposedly, the Pacific Coast Highway only refers to the Highway 1 running from Dana Point to Leggitt in California. After that, the 101 picks it up and runs all the way to the top of the Olympic Peninsula. Well, I think the whole thing should be called the PCH, since it is all the highway along the Pacific coast. So there.

Anyway, we continued down the PCH. It was absolutely beautiful. The weather couldn’t have been better. We stopped many times at different vista points, especially those in Big Sur. We got photos of the bridges and marveled at the redwoods. We parked and got several photos of the elephant seals at Piedras Blancas, near San Simeon. We saw Heart Castle up on the hill. We ate clam chowder at Splash Cafe in Pismo Beach, which is without a doubt the best clam chowder on earth. And all the while there wasn’t a hint of fog or rain, something very rare on this route. Here’s an interesting fact. The world-famous “Big Sur” is actually a region of the coast that doesn’t have any definitive boundaries. Most people think of Big Sur as just the famous bridge in the photo below, but it actually includes a significant portion of the coast, large redwood forest and plenty of campgrounds and fancy lodgings.

That night we both got a wonderful treat – an injection of ozone (O3) directly into our necks. I received 55cc and my dad got a full 100cc! This technology is amazing, but you should read about it here on Wikipedia so someone in America doesn’t try to sue me for giving medical advice.

A couple more days in southern California taking care of personal matters, going on some fantastic hikes and meeting some friends, and then we were back on the road. This time we skipped the meandering Highway 1 and went straight up the 101 to Oakland, stopping at Splash Cafe for seconds of clam chowder, and arriving right on schedule for me to catch my flight to Sweden. Don’t forget to read here about how I got that flight for only $200!

I’d love to do the PCH again someday, preferably starting in Seattle with an RV rental and maybe even seeing some of the California attractions that I never saw in all my years there! My dad is getting a bit older and I don’t know he’ll be up for another trip, but I’d love to take him someday. If not, perhaps it will be with my future son and he can be the one driving next time.

So here I sit on a train in Sweden traveling from Stockholm to Gothenburg, where I will then be picked up and taken to Sjuntorp, population 2,124, where I will help on a farm for the next five weeks. I’ll be getting more stories out soon, hopefully, like how I fell off a horse and broke my tablet before I even made it to the farm…. Great to be back in Europe!