A friend once asked me what my favorite cuisine was. Without hesitation, I answered “British.” “That’s not a real cuisine,” he said. I beg to differ. England certainly has its own dishes, and a London food tour is the perfect way to learn about them.

I won’t bother listing out every dish in the British cuisine. They’re already listed on Wikipedia. But I will mention some of my favorites just to point out it really is its own cuisine.

Highlights of the British Cuisine

This is by far my favorite British dish. To say I knew it as a child, eating fish fingers and french fries, would be an insult to the meal. The first time I can say I tried real fish and chips was at the Britannia Pub in Santa Monica, California. It was so good, It made me want to move to the UK someday just so I could eat it all the time.

When I finally arrived in the UK for my first time in 2015, I was determined to have fish and chips for my first meal. Unfortunately, I was pitifully ignorant of what I was looking for. I ended up at an Indian restaurant in Golders Green, simply because it was the cheapest place in town near my Couchsurfing host. I have long since come to appreciate better fish and chips.

British fish and chips are usually made with cod or haddock. The batter is either a flour base or breadcrumbs, and often made with beer or whiskey. Fries in the UK are called chips (like a chip of a vegetable) and are cut thick like the fat fries at Fatburger. The quality of the fish, chips and oil can vary wildly. More than once, the fish I was given was so bad, I had to throw it out. The best places to buy fish and chips are usually along the coast. Bankers in Brighton was my favorite until I found Stein Inn on the Isle of Skye. Stein Inn uses Mallaig haddock caught fresh every day, and the portions are massive. A single piece of fish is usually over a foot long, and the pile of chips is even bigger. Fish and chips is definitely an integral part of the London food tour, although I’m not going to spoil where you’ll get a sample from. Suffice to say, top-quality options are definitely available in London.

Perhaps my second-favorite British food is bangers and mash, or sausages and mashed potatoes. I don’t think there’s any restriction on what kind of sausage is used, although my favorite is the typical Cumberland sausage which is made from chopped pork and flavored with pepper and other spices. The mash is usually basic mashed potatoes. Gravy is a common side, although British gravy differs wildly from its American counterpart. Bangers and mash is one of my favorite meals to cook at home, especially since it’s almost as cheap as a big bowl of pasta (and a tad healthier). I put a little twist on my mash, adding butter, milk, paprika, pepper and other herbs. If you happen to be heading to Edinburgh, I’d recommend trying this dish at MUM’s Comfort Food. They have different fresh sausages every day and a long list of mash and gravy flavors. The Scottish breakfast is my favorite breakfast in the world, and the full English breakfast is the runner-up. They’re quite similar actually. The basics are eggs (fried, scrambled or poached), bacon, tomatoes and sausages, all fried up and served with baked beans and toast. The Scottish variant usually includes national items such as black pudding, haggis, lorne sausage, tattie (potato) scones and/or oatcakes. Tea is obviously served with breakfast, although coffee has recently become an option too. One of my favorite things about B&Bs in the UK (and sometimes even AIrB&Bs) is that they often serve a full English breakfast with your stay. It is a bed and breakfast after all! Getting all the ingredients together for home-cooking when you’re on your own isn’t always feasible, but many pubs will serve a decent breakfast for a fiver (£5, or $6.50). I think it’s a little funny that what I used to call shepherd’s pie in America, which I made all the time, was really cottage pie. Shepherd’s herd sheep and thus shepherd’s pie is made with lamb, while cottage pie is made with beef. You’re probably familiar with one or both of the pies. One thing I learned in the UK (and most of the world) is that meat quality is usually better outside the US. Other than layers of meat and potatoes, the ingredients can vary wildly from corn and carrots to bell peppers and cheese. Everything is baked together as a “pie” and it can be quite filling, not to mention cheap considering one pie is good for several servings. Shepherd’s pie is just one of a huge range of pies made in the UK. Steak and kidney pie is another big one, but you can get almost any group of ingredients. Just go for one that’s made fresh from farmers. You’ll get to learn all about that on the London food tour.

It hasn’t been long since I enjoyed my first Sunday Roast at the Village Hotel in Edinburgh. How I made it that long in the UK without one, I have no idea. There’s hardly a pub in the country that doesn’t serve them. The meal is roasted meat, roasted potatoes, roasted vegetables and Yorkshire pudding (souffle batter baked at high heat). Recently when I joined my friend for a Sunday roast at her parent’s house, my plate was heaped with way more food than I could have hoped to eat in three meals. I learned that this was a tradition in many households across the UK every Sunday morning (or early afternoon), and often it’s the only meal of the day that’s consumed. On my first visit to London, I lucked into finding the Southbank Center Food Market, which I thought was simply magical. Later, I had several friends recommend that I visit Camden Market, but I wasn’t particularly impressed with that one (maybe I just found the wrong part of it). It wasn’t until my dozenth visit to London that I discovered the Borough Market, thanks to the Secret London Food Tour. Ironically, I had spent the previous night at St. Christophers Inn Village, almost across the street from the market, without knowing it was there. The Borough Market is a highlight of the best food tour in London, although I’m not going to spoil all the information they’re going to give you about the market. I’ll simply say that it’s my favorite food market in London, and the whole UK for that matter (since I don’t really know any other markets like it in the country). We were given a chance to wander around while some of our dishes on the tour were prepared, and I meandered from one stall to another, sampling everything from cheeses and chocolates to chutney and smoked haddock. At one point, my nose twitched to the unmistakable smell of Thailand. I followed my nose to a stall selling Pad Thai, manned by a large group of Thais. It’s the first time outside Thailand when Thai food has actually smelled like…well…Thailand. If I hadn’t been on a food tour, that certainly would have been my lunch. I’ll be headed straight there the next time I’m in London for sure. 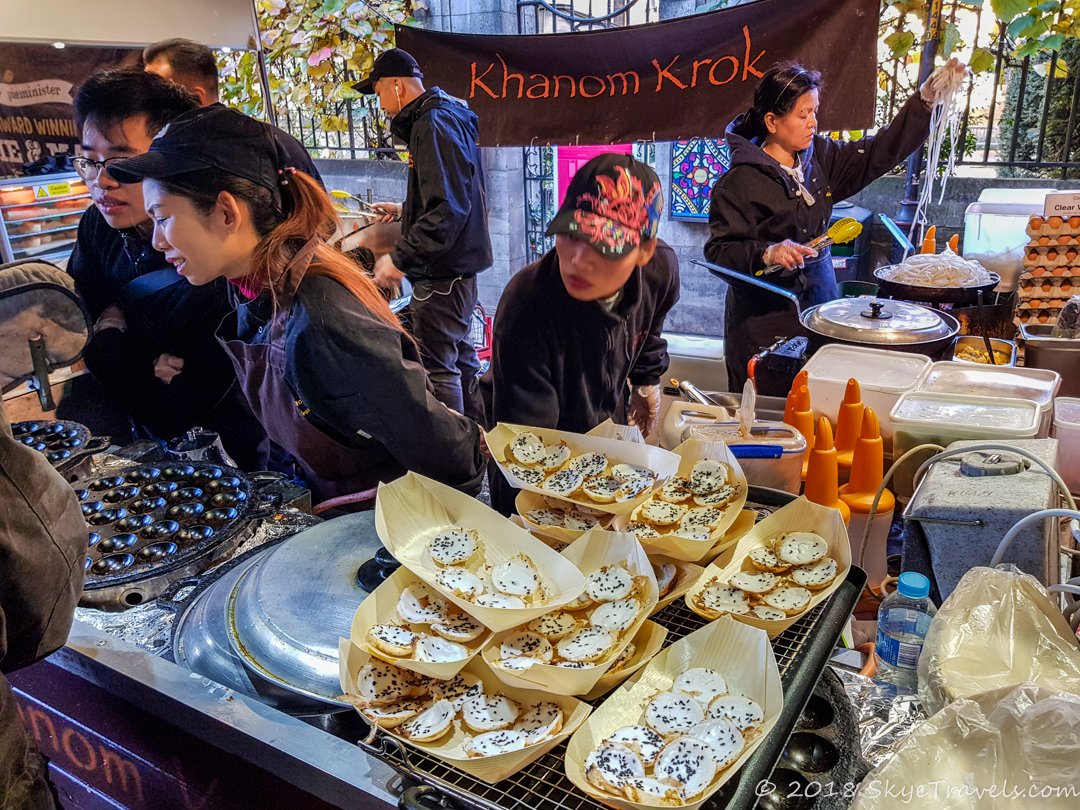 Obviously, Thai food wasn’t the highlight of the market. It does focus on British food, but again, I don’t want to spoil the tour. Also, the London food tour isn’t the only tour that will take you to Borough Market. Any Harry Potter Tour of London will probably take you there too (hint, hint).

Here are some more reasons to visit Borough Market.

The London food tour I booked was with Secret Food Tours, although they aren’t so secret. They operate in over 60 cities across North America, Europe and Asia. I did their Edinburgh Food Tour, on which I learned about even more delicious Scottish food than I already knew. The one in London is no different, and I was introduced to a couple British dishes I was unaware of, while getting the information behind many of my favorites. The London food tour lasts about 3 hours and starts from the south end of London Bridge outside the Evans Cycle shop. There are three other tours available. The London Indian food tour on Brick Lane given Tuesday through Saturday will sample 9 dishes at 6 locations over the course of three hours. There are also two tours in Shoreditch, one a food tour and the other a craft beer tour. That last tour is adults only. If you’re not a big foodie, you can always just take a normal walking tour in London.