I was told Kaunas could be visited in a day. Sure it can, but you’ll miss a lot if you do. My four Couchsurfing hosts showed me just how much there was to do. Spending a full week in Kaunas was definitely a highlight in my travels. I had no idea there would be so much to do there or how many great friends I would make.

My Week in Kaunas

Getting to Kaunas and the Old Town

The first day was actually spent at my Couchsurfer’s home, catching up on my blog and waiting out the rain. But my arrival the previous night was the real story. In my post on Warsaw, I mentioned my adventure of buying a ticket in the wrong direction. The adventure didn’t stop there. After a few hours on the bus, the driver stopped and told me we were in Kaunas. I looked out the window and saw nothing. No bus station, no city, no lights, nothing. Just empty fields beside the highway. Yeah, I got a little worried. Luckily, my internet had already kicked in for the new country, and Google Maps showed me I had been dropped off on the very outskirts of town, but I was less than a kilometer away from my first Couchsurfing host, Rasa. So the adventure had a happy ending. The next day I set out to find the free walking tour, which is the first thing to do in each city you visit. The website said to meet at the White Church of Kaunas, so I Googled white churches and was at the massive, white Christ’s Resurrection Church at noon. There was no walking tour. I realized another big, white church was a few blocks away, St. Michael the Archangel’s Church, so I ran as fast as I could to get there quickly. No walking tour. At this point, I came to the conclusion that the walking tour was no longer happening, possibly because the school year had just started and the guides were back in university. The most recent post on their FB page was also several months old, so I set off to explore the town on my own. OK, it’s true, the town can be walked through in a day…if you’re willing to skip all the museums, avoid all the parks and not meet any of the locals. Otherwise, you need a lot more time than that for all the things to do in Kaunas. There are two main streets to explore: Liberty Avenue and Vilnius Street. They are technically one long street separated by an underpass. The first street is primarily shopping, while the next is restaurants. Just making it from one end to the other and window shopping can take a few hours. I got to see a folk dancing festival, local crafts and sweets, and many of the beautiful churches scattered around the Old Town. Kaunas seems to have donuts as one of its specialty foods. I walked into the Donut Lab which had recently opened. The selection was overwhelming. My “crispy donut” was amazing alongside a chai latte. Later, my Couchsurfing host told me about Spurginė, the best and oldest doughnut shop in town. Unfortunately, I didn’t make it there myself, so it’s on the bucket list for next time. After the streets, I went through Confluence Park. This is the meeting of the two rivers in Kaunas: the Nemunas and the Neris. This large park also contains Kaunas Castle, which can be explored for €3 ($3.50) Most of the museums in Kaunas are also located next to this park, as well as some beautiful churches and a large seminary. If museums are your thing, some options are the Communications History Museum, the Medical History Museum, and the Sports Museum. They are priced similarly to the castle, as is everything else in town. If you’re a budget traveler like me, Kaunas is definitely the city for you. 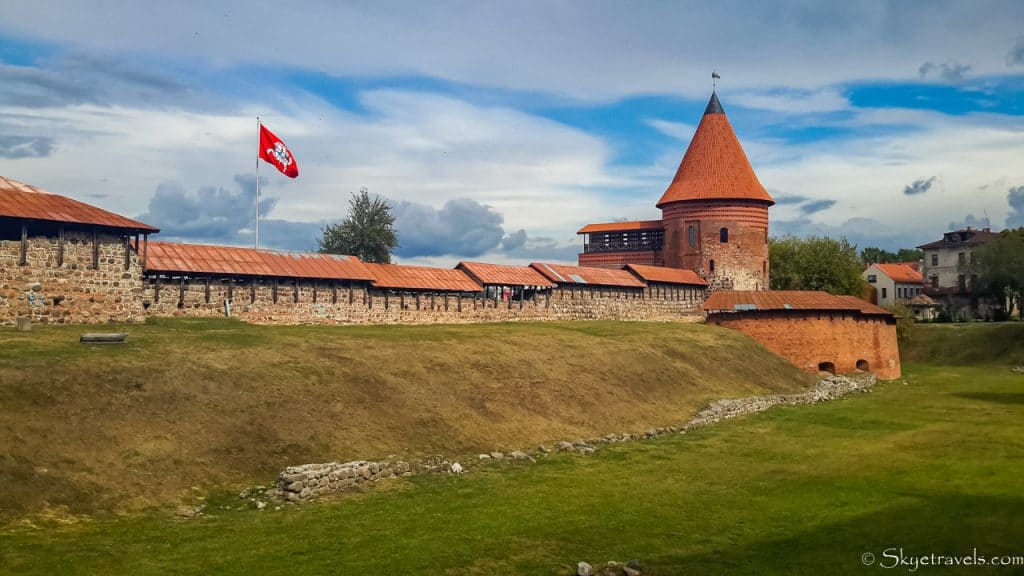 That evening, I had a rather enjoyable experience with my Couchsurfing host. I was invited to her yoga class at the local gym. A yoga class has always been on my bucket list and I readily accepted. I didn’t realize there was an hour aerobics class before the hour of yoga! While I couldn’t understand the instructions in Lithuanian, I followed the movements well and my host said the instructor was impressed. Two hours of workouts I was unaccustomed to were exhausting! I can’t wait for the next time!!!

Sorry, no photos of the class.

The next day, I met up with my next Couchsurfing host, Rūta. She took me to the Kaunas Open Air Museum. I’d never heard of an open air museum before, but apparently, all of the northern countries in Europe have them. It’s basically a huge park where they bring in houses from all over the country from different periods of the country’s history. If you go in the summer, they also have craftsmen and housemaids doing the tasks that they would have done in the dwellings at their respective times in history. This is a place I would highly recommend for you to visit when you travel to Kaunas. Admission is only €2.90 (about $3.50). Even a rainstorm in the middle of the day couldn’t dampen our fun or enjoyment of the villages. The Spa Town of Birštonas

On Saturday, Rasa took me to Birštonas, a large resort park south of Kaunas. It’s quite beautiful there. After a long walk along the river, we hiked to a tall hill with a panoramic view of the countryside. Did you know that in the Baltic States, hill and mountain are the same word? The highest mountains are only about 3,000 feet high, and most of the Baltic countries are very flat. If you get up high enough, you can see an amazing expanse of the surrounding wilderness. Cycling in the Lithuanian Countryside

Sunday was an even wilder excursion. Saturday night I stayed with my third Couchsurfing host, Zita. We got up before 6 a.m. and took a bus to Viešvilė, 110 km west of Kaunas. From there we then rode bikes more than 50 miles around the countryside to Veliuona, where we got the bus back to Kaunas. Then it was nearly 6 miles more riding back to the house from the bus stop for a total of over 60 miles of riding that day. Suffice to say, if I thought the aerobics class was hard, this was almost too much. I can honestly say it’s the farthest I’ve ever ridden a bike in a single day. The stunning views of the river and hills along the way were more than worth the pain. Monday was another relax day. I explored the town some more, but also finished writing about another city in my blog. Other than that, the day was spent chatting with Rūta and her boyfriend Paulis, making a couple meals with them and making plans for my further travels. That afternoon I took a bus across town to my fourth and final host, Aiste. I thought it was funny that one of the first things she asked me was how to pronounce her name. When I said it correctly, she was mildly impressed. I guess I’m getting the hang of all these new languages.

Finally, it was time to move on. Tuesday I met up with my Blablacar driver, Erki, to get my ride to Riga, Latvia. Erki is a musician who travels around the Baltic States performing, and he was a wonderful conversational companion for the trip. Blablacar is great for getting rides that are cheaper than public transportation, but even better for making new friends. He was also kind enough to drop me off right in front of my host’s house in Riga and waited until he was sure they were home.

Overall, my experience in Kaunas was absolutely top-notch. I always have a hard time leaving a place which I really like and have met good friends in, but Kaunas was more so than usual. All of my Couchsurfing hosts were exceptional: Rasa, Rūta and Paulis, Zita and Aiste. I’ll be back for certain, and maybe even for an extended period of time. It’s a city and a country I definitely wouldn’t mind settling in for a few months someday. Tips for My Fellow Backpackers

So why should tourists not visit Kaunas? Because they would spoil it. There are very few hotels in this city, and not a lot of tourist attractions. But for travelers it’s heaven. Cheap, wonderful friends and a beautiful countryside. There’s a big university in town so there are always students at night to hang out with, and the two main streets mentioned above can get pretty busy on the weekends, but only with locals, not tourists. That’s why Kaunas is for travelers.

For travelers, there are only three hostels, and two of them are in the same location. The main one, and the one I’d recommend, is the Monk’s Bunk. It’s not easy to find, and no signs on the street. You can use Google maps, and then you’ll see a picture of a backpacker painted on the wall near the entrance. There are only eighteen beds. Amazingly they fill up. Book ahead and enjoy. For restaurants, I hardly have to warn you to avoid tourist restaurants. Here the restaurants are for locals, and serve really good food at dirt cheap prices. You can also go to the enormous Akropolis, a shopping center virtually built over an old factory, with the brick factory inside and now making up the decor. Or you can go to the Mega shopping center on the other side of town and see the aquarium inside. There are parks, music festivals and any number of events to experience. On Saturday morning there is also a local market that takes up all of Liberty Avenue. Finally, there is the surrounding countryside. Make sure you make it to the Open Air Museum. Visit Birštonas. Go on a long bike ride (I’m sure Zita would love to take you along…if you can keep up). Take a trip out to the Baltic Sea. On my next trip to Kaunas, Aiste has promised to drive me to Trakai Island – Lithuania’s own fairytale castle and history museum. Aiste, you’re not off the hook with getting your driving license by next year. This makes it official! A Traveler’s Guide to Visiting Warsaw for 48 Hours

Riga is Even Better Than I Expected