If you’re planning to visit Vianden Castle during your journey to Luxembourg, here’s a guide on how to get there and what to expect. Luxembourg isn’t a country that shoves its tourism in your face, and you won’t see hundreds of tours leaving to Vianden Castle from Luxembourg City, so this guide is quite useful.

Luxembourg isn’t a big country – one of the smallest in Europe – and there’s not a lot to do there. There are a few good attractions in Luxembourg City including the Bock Casemates, the underground tunnels of Luxembourg Fortress. The fortress itself was 90% demolished after the Second Treaty of London ordered its dismantlement in 1867, but the tunnels couldn’t be destroyed without damaging the city above. Now they’re one of the primary attractions within the city. Getting to Vianden Castle

If the tunnels don’t satisfy your medieval interests, there are over 50 castles and villages around the country you can explore. Probably the best of these is Vianden Castle, located about two hours north of Luxembourg City on the border of Germany. Visiting Vianden Castle is a full-day excursion, and well worth it if you have a day to spare during your visit.

If you don’t have a rental car, it’s rather easy to reach Vianden by train. From the Luxembourg Central Train Station (located about 20 minutes south of the city center by foot), take the train to Diekirch. There weren’t many trains headed out of the central station so it was easy to get on the right one. I jumped on the RB 5600 heading north. Google Maps doesn’t show this train, but it leaves every half an hour from the central station to Diekirch. The train ride is roughly 47 minutes long. Once in Diekirch, I took the 570 bus to Vianden, getting off at the stop on the far side of the river directly beneath Vianden castle. Altogether, it was about an hour and a half of traveling, although I took a lunch break in Diekirch.

The restaurants and cafes in Vianden aren’t particularly expensive by Luxembourg standards, which means they’re quite expensive compared to nearly everywhere else. I checked several on the map during the train ride up, and finally decided it would be cheaper to get something in Diekirch. I was also hungry and didn’t want to wait any longer to eat. As mentioned in my other articles on Luxembourg, a kebab shop is the cheapest place to eat in the country.

Snack Istanbul in Diekirch had some pretty glowing reviews, many of which said it was the best kebab in the country. Of course, I had to try it out for myself. I got the kebab sandwich covered with andalouse sauce. At only €5 ($5.50), it was the best and cheapest option, although certainly not the smallest. It was a struggle for me to finish the sandwich, and I can easily agree it was fantastic! When I jumped off the bus in Vianden, I missed the map that showed all the different routes up to the castle. A road sign said to follow the single road in town up to the top of the hill, so I did. It’s a little over half a mile to the entrance of the castle, with a few cute little shops to check out on the way up. I was particularly interested in a store selling handmade cosplay outfits. Someday I’d love to get into that, although it wouldn’t be easy for me to fit a costume into my backpack. I found another more direct way up to the castle, although it’s not really that much shorter. Across from the Église Trinitaire church is a tiny stairwell between houses 58 and 60. If you go up them and then climb the single trail up the hill, you’ll come to the castle as well. You’ll also find a tower on the cliff overlooking the town from this trail. From the top of the cliff, I got some really nice photographs of Vianden and the river. 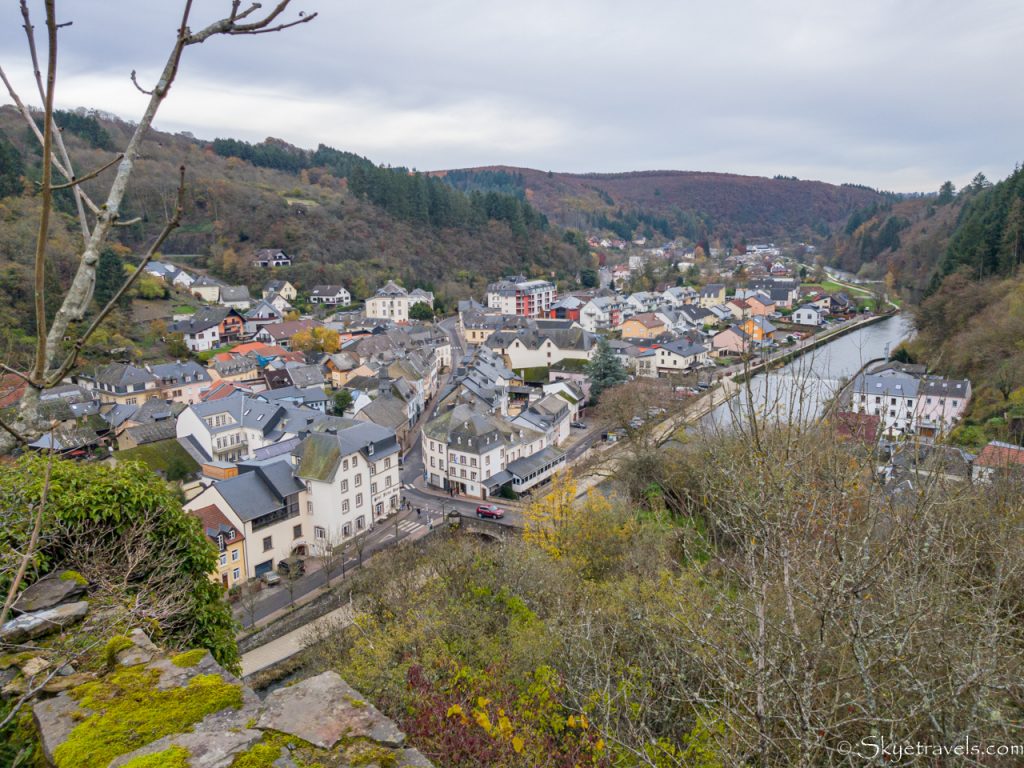 There is a third way up to the castle which is the longest but has the best views of the castle. Next to the river are two cafes – Cafe Du Pont and Brasserie Des Arts. Between these is an alleyway fronted by a small stone arch. This is the beginning of the trail which climbs the far side of the valley across from the castle. This trail isn’t significantly longer than just walking up the road, but it will give you the best vantage for photographs of the castle. Unfortunately, I didn’t walk that trail myself, as I only found out about it as I was waiting for the bus back to Luxembourg City. Tickets to explore the castle are €7 ($7.70) for adults, or free with the Luxembourg Card. The castle is open nearly every day from 10 a.m. to 4 p.m. Unfortunately, I arrived not long before 4, so I chose not to explore the inside of the castle. Not a big loss for me as I’ve been to many, many castles in my travels.

The castle isn’t the only attraction in Vianden. The church mentioned above is worth a visit. It’s small but cute. I’m not particularly sure why but I always like checking out churches when I travel. You never know when you’ll find a truly spectacular one. There’s also the Vianden Museum of Caricature and Cartoon, but it was closed when I passed by.

There are several different restaurants and guesthouses in Vianden. Most were charging around $100 a night. The cheapest place to stay is at the Youth Hostel, which is $22 a night if they’re not fully booked. You could spend a night there to visit the castle, but this is a trip easily done in a day or even half a day. With the free public transportation, you can take this excursion for as little as $10 if you pay for entrance into the castle and lunch at a supermarket. If you want to eat out, budget about $8 per person for a kebab (including a drink), $12 for a cafe or $20 for a restaurant.

Click here to purchase the Luxembourg Card and visit the castle for free. 6 Interesting Facts About Luxembourg I Learned While Visiting

End of the Year Report and Plans for 2020

Is the Seattle City Pass a Good Value – An Honest Review